The Coffs Harbour/Boambee mystery has been widely reported.  This variant on the Woolgoolga Road, one of my many old UFO hunting stamping groups is interesting.  The witness goes through a classic "escalation of hypotheses" none of which seem to fit the bill - a car, a man with a lampo railway light.  An intriguing mystery light

From the Sydney Morning Herald of 8 May 1905 a local mystery light creates excitement - marsh gas or genuine mystery? 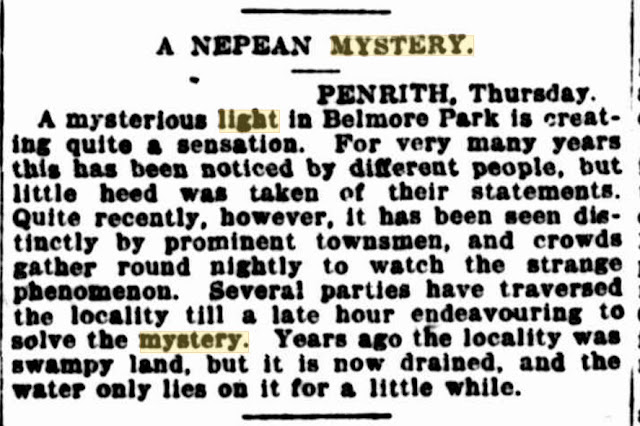 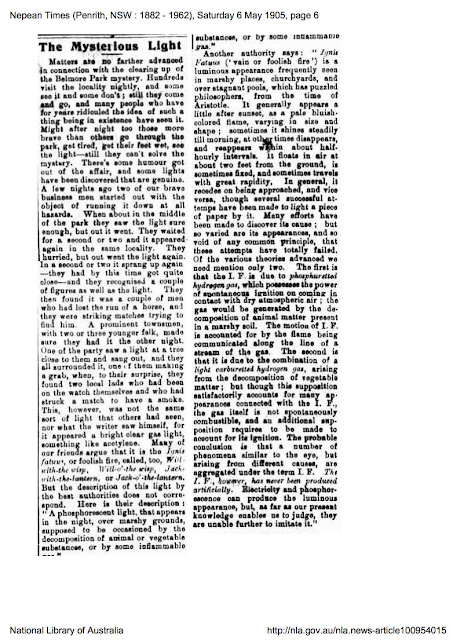 Posted by Bill Chalker at 8:54 AM No comments:

An interesting general account of the 1909 "light" mystery.  Many accounts were caused by the conjunction of Venus and Jupiter, but some seemed to be a mystery. 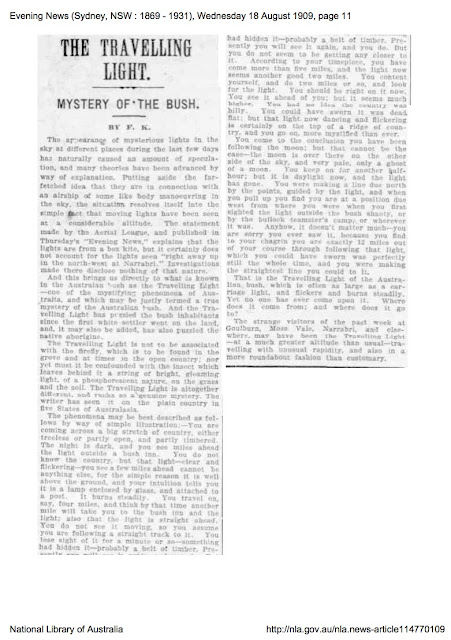 Posted by Bill Chalker at 8:44 AM No comments:

I was rather puzzled and surprised by Keith Basterfield's December 27 2015 post: "The published Australian report of a UFO sighting?".
I was not surprised by the details, as I had read James Holledge's 1965 book very early in my UFO interest around the late 1960s.
As for the content of the 1874 Beechworth report I had research this event way back in about 1975-77 uncovering the "hard way" numerous accounts of the story in hard copy editions of newspapers held in  the NSW state library.  It was clear back then that the report probably was of a widespread viewed meteoric event of a spectacular nature.
In 1981 I circulated a “Preliminary listing of Australian Historical UFO Events - Prehistory to 1949” to try to ignite interest in historical UFO cases. This sighting material was largely put together from diverse sources by Paul Cropper and me.  I choose the end year of 1949 because it seemed based on research at the time that 1950 marked the significant beginnings of the Australian UFO experience.  I listed the year, location and a few words about over 110 events, plus 56 New Zealand “airship” events from 1909, as well a few more Fortean or apparitional phenomena.
In that listing I included: "1874 – 5 separate events, including the Beechworth “meteor.” "
By 2010 my friend Paul Cropper was becoming very active in mining the growing on-line resources of old newspapers.  He shared these with me and as my own computer resources improved I also plunged into this resource.  Both Paul and I were veterans of the "hard way" and from that point in the late 1970s we became friends.
Here is the central NSW reporting of the "Singular Celestial Phenomenon", that informed the Beechworth event, which we verified in digital form back in 2010.  We had both found extensive details in the hard copies of newspaper held in the NSW State Library back in the 1970s: 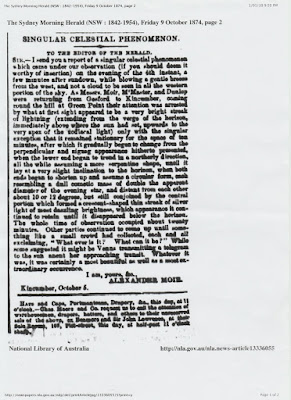 When Keith Basterfield produced his "Catalogue of pre 24 June 1947 Australian Unidentified Aerial Phenomena" in July 2011 I had expressed surprised that he had generated the initial catalogue without even involving me, as I had had a long term focus on historical Australian UFO reports.  I went to the trouble back in December 2011 to send him an annotated version of his catalogue which included the following details:
"Around 1975 I located newspaper references related this event.During October, 1874, a “celestial display” of considerable magnitude was observed over a wide area.  The Sydney Morning Herald of October 8 and 9, 1874, documents the story.  The event occurred on October 4 at about 6 p.m., and involved “a meteor of great size, (which) suddenly flashed in the western heavens immediately over where the sun had set, and bursting like a rocket into numerous brilliant spangles, left behind it a straight silvery line resembling a streak of lightning.  This line shortly afterwards, seemed to assume a sinuous or spiral shape, the folds of which gradually contracted or became as it were compressed till they presented somewhat of a zig-zag appearance, the angles being particularly bright and silvery.”  The phenomenon lasted for about 20 minutes over Victoria.  One witness suggested it might be “Venus transmitting a telegram to the sun (about) her approaching transit.  Whatever it was certainly a most beautiful as well as a most extraordinary occurrence.”  The event was probably of a celestial nature – a striking meteor with a pronounced and enduring tail, seen over a widespread area, such as Beechworth, Victoria, and Goulburn, Gosford and Wagga in NSW."
These details were also included in my article "The Search for historical UFO reports in Australia" published in the Australian magazine "Ufologist" in March-April 2012.  That article included further details:

"In 1958, Jack Kunst, a reporter, and Ken Hatton, an airline navigation officer, both members of the UFO Investigation Centre (UFOIC), compiled a listing of “Australian Sightings” from 1874 to 1958. 4 pre-1947 sightings were included: 1874 Oct 11 Beechworth Victoria, 1942 Feb 26 Timor Sea, 1944 Feb Bass Strait, and 1946 Grenfell district.
"In 1965 Australia’s first flying saucer book appeared – “Flying Saucers over Australia” by James Holledge.  It also lists the 4 historical sightings described by UFOIC’s Jack Kunst and Ken Hatton.  Holledge reports “From their own research, Australian ufologists believe that the first published report of an unidentified flying object in this country occurred as far back as October, 1874, at Beechworth in Victoria.”
The Beechworth entry in the 1958 Kunst/Hatton listing was dated as 11 October 1874 (apparently the media date) and the source was listed as "UFORUM 1/1" - UFORUM was the early publication of the Victorian Flying Saucer Research Society.  Does anyone have a copy of this issue? My copies of this publication begin with later issues.
When Keith produced his third edition of his catalogue (dated 26 November 2015) and his recent piece I was surprised to read this:
"However, no one to my knowledge has ever been able to precisely pin down what was seen, and when in October 1874, this happened. In version three of my catalogue of Australian pre 24 June 1947 sightings, I mentioned that I had been unable to ascertain further details."
So the reality is that the Beechworth report was known about since the late 1950s courtesy of the Victorian Flying Saucer Research Society's publication UFORUM, and with the 1965 Holledge book, which used UFOIC research - the Kunst/Hatton listing.  My own research in the late 1970s highlighted the widespread nature of the "Beechworth" event and suggested it was of a spectacular meteor and its wake.  Since then digital researchers have re-"discovered" these facts.
Posted by Bill Chalker at 2:07 AM No comments:

Keith Basterfield reported on February 1947 (not February 1946)  item back
in January 2011
http://ufos-scientificresearch.blogspot.com/2011/01/cold-case-port-augusta-5-february-1947.html
I am pleased that Ole Jonny Braenne has drawn attention to the actual date
of the return of the Smith flight back to Adelaide as Tuesday March 23rd
1920.

I have now had the opportunity to look at the Adelaide Advertiser around
that date.  The coverage of the events leading up to the Vimy landing (The
Smith plane) suggests that the 1947 recollection by H.N. Wicks of the 1920
events may be confused.  The "two large black objects" may well have been
the biplanes being flown by Captains A.R. Moore and Captain Loftus.  These
planes eventually escorted the Vimy piloted by the Smiths - the stars of the
day's spectacle - called "Our Knights of the Air" by the local paper.
Elsewhere in the papers coverage we see reference Captain Butler having a
delayed take off, finally leaving sometime after 1pm.  The planes of Moore
and Loftus appear soon after, preforming "evolutions" over the aerodrome.
The Vimy was first seen at 1.45 pm not far from Mount Lofty.  It was soon
joined by the two local planes piloted by Moore and Loftus, finally landing
soon after 2.12 pm.  As for Captain Butler's plane, it seems his flight was
a matter of some anxiety.  He turned up at 2.45 pm, saying he had been
unable to "pick up" the Vimy, described elsewhere in the coverage as "a
mammoth compared with the other machines." He put his inability to find the
Vimy down to the mist in the hills.
So I suspect that the various observations of Mr. Wicks recollected in the
1947 letter to the editor, were of Captain Butler flying over the area and
the other two objects sighted were the two other local pilots Moore and
Loftus.
Happy to hear of any other suggestions.  So far I haven't picked up on any
March 1920 accounts or letters suggesting mysterious objects flying around
that day.

Posted by Bill Chalker at 1:45 AM No comments:

Validation of the 1868 Frederick Birmingham story

In the latest "Ufologist" Robert Frola has done a great job of presenting my column devoted to the historical case of Frederick William Birmingham, which I have been researching since 1975!
Here are some extracts from the piece, the validating 1911 Hebert Rumsey letter, and a picture of Rumsey with one of his daughters.  I had the pleasure to recently speak with Hebert Rumsey's grandson. 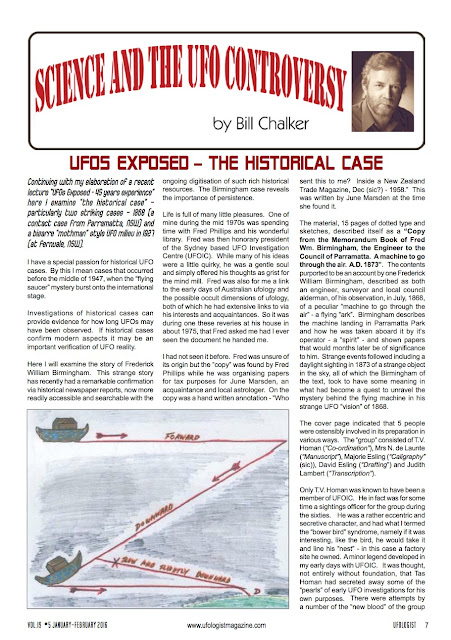 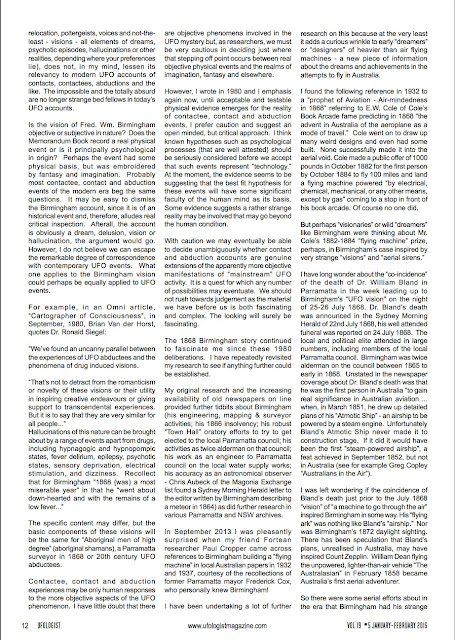 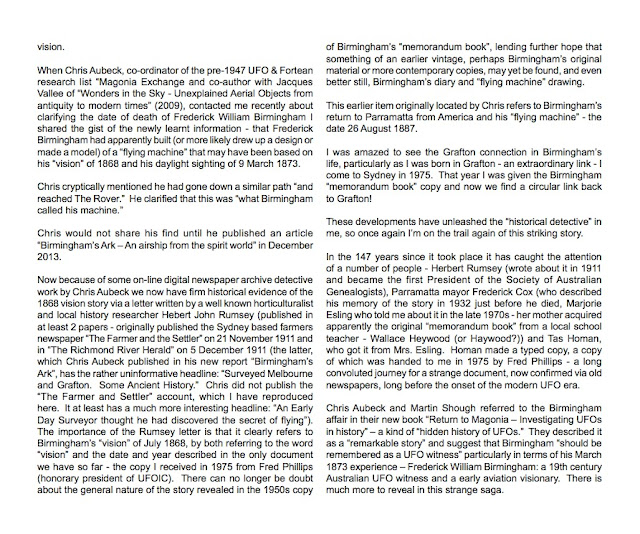 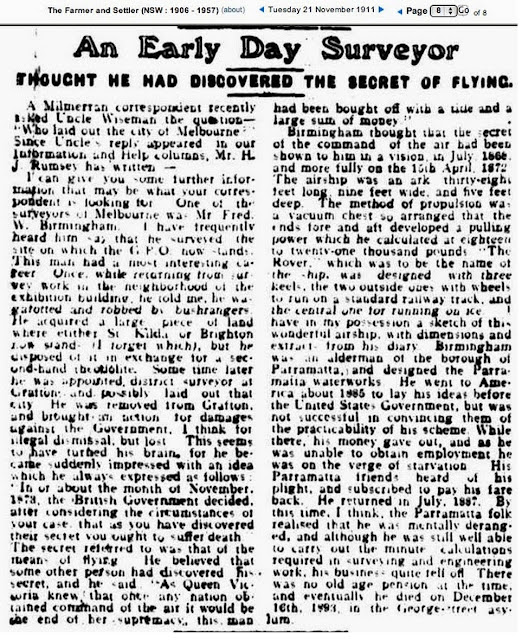 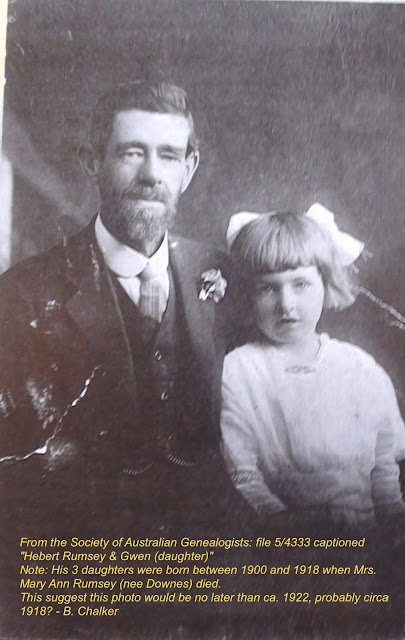 Posted by Bill Chalker at 7:52 AM No comments:

"Sun pillar" as a possible explanation of King's "vision" of 1861 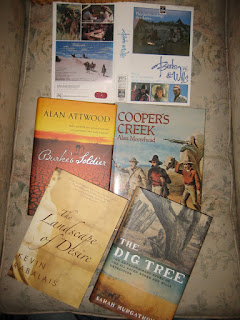 Following on from the introductory essay that describes King's "vision" of 1861 during the last days of the tragic and epic Burke and Wills expedition, Martin Shough, coauthor of the excellent book "Return to Magonia - Investigating UFOs in History" (Anomalist Books, 2015) suggested King may have witnessed a "sun -pillar".  This potentially would fit the circumstances of the sighting.  Of course the paucity of data and very limited met data available on the day in question prevents certainty.
The following information on "sun-pillars" highlights that they can be impressive and sometimes be viewed (in olden days) as "a sign of God." 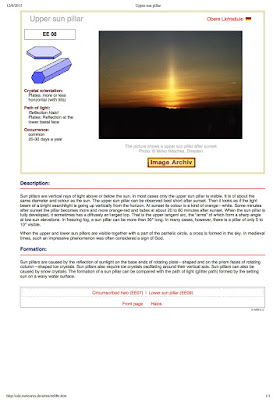 Posted by Bill Chalker at 1:07 AM No comments:

Bill Chalker
Coordinator of the Sydney based UFO Investigation Centre (UFOIC) & the Anomaly Physical Evidence Group (APEG). Information about sightings and research are most welcome. Author of "The OZ Files - the Australian UFO Story" (1996), "Hair of the Alien - DNA and other forensic evidence of alien abduction" (2005), and "UFO History Keys - Examining the UFO controversy from a historical perspective" (2011). Enquiries via billozfiles@tpg.com.au or P.O. Box 42, West Pennant Hills, NSW, 2125, AUSTRALIA. In "HAIR of the ALIEN" (order via www.amazon.com) my primary focus is promoting a forensic scientific approach to examining the alien abduction controversy, concentrating on the DNA approach where compelling biological evidence is available.